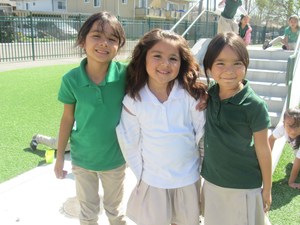 But the catch is that under the new law, districts can only receive reimbursement from the state after a child turns 5, based on average daily attendance. Before that, districts must find their own funds to underwrite the costs of the program.

As a result, few districts have seized the opportunity to offer what is called “expanded transitional kindergarten” to younger 4-year-olds.

On April 25, 2017, our Board of Education approved the expansion of TK eligibility. The District’s Transitional Kindergarten program shall admit children whose fifth birthday lies between September 2 and December 2 in the current school year:(Education Code 48000).
When space is available (TK Waitlist), additional students may be admitted based on developmental readiness and the following age criteria:
With the expanded age eligibility window, our District is one step closer to closing the opportunity gap for young learners. TK gives our youngest students a head start in instruction and provides them with an opportunity to learn and grow in an environment tailored to meet their academic and social needs. If you are interested in registering your child for TK or have questions, please contact the Early Learning Department at 408-283-6039.
https://edsource.org/2017/some-smaller-districts-enroll-younger-4-year-olds-in-early-kindergarten/581413 Source: EdSource
Print